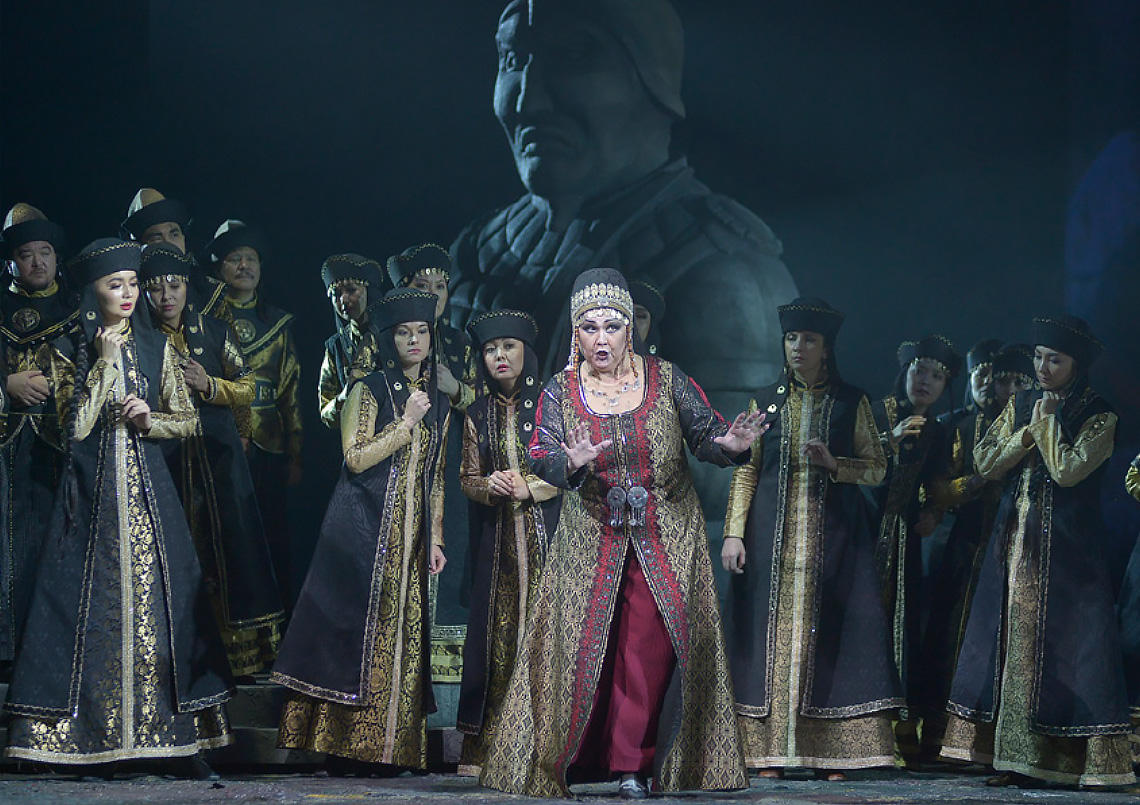 Review on premiere the Alpamys opera

Throughout December 2021, Kazakhstan celebrated the 30th anniversary of its independence. The desire to assert national identity has been reflected in the field of musical theatre, with Kazakh national operas increasingly being staged in the three Kazakhstani opera houses. In the Soviet years, a first-class school of composition was created in Kazakhstan, which produced many works combining Kazakh folklore and European musical culture. One of these is the opera Alpamys by Yerkegali Rakhmadiyev, Vittorio Prato and Lavinia Bini in ‘Il segreto di Susanna’ in Verona 592 Opera, May 2022 first performed in 1974. Kauken Kenzhetaev’s libretto draws upon epic legends about the eponymous Kazakh folk hero. Alpamys protects his land and people from the injustices of the cruel ruler Taishik Khan, saves his beloved Gulbarshin, and is captured by the cunning witch Mystan, but with the help of the shepherd Keykuat escapes and again leads the people’s struggle for happiness and justice. ‘I wanted to depict and convey in music not only the heroic power of the protagonist, but also the great, inexhaustible strength of the whole nation, to create a large heroic-epic canvas,’ the composer wrote back in 1974.

In this he succeeded. The music of the opera, performed at the astana opera house in Nur-Sultan (formerly Astana) on December 3 and 4, is melodically rich, the orchestration colourful and inventive, the dramaturgy convincing, with skilful contrast between lyrical and dramatic episodes, piercing laments and dashing dances, beautiful choruses and expressive vocal lines sung in the Kazakh language. The music is a synthesis of the styles of the European, Russian and Soviet schools with the music of the steppes. Rakhmadiyev uses folk music: the narrator (performed by Yerlan Ryskali) twice takes the stage and improvises, accompanied by dombra (the Kazakh lute). The element of folk ritual thus invades the more academic environment of the opera, but thanks to the context it all seems organic.

The Russian director Yury Alexandrov, who has worked in Kazakh opera before, brilliantly conveyed the epic scale of the work in his production for astana opera. Realistic at its core, the action was at the same time poetic, with detailed acting and touchingly entertaining moments such as Keykuat entering with a live goat, whose bleating echoed the phrases of his aria. The designs, by Sofya Tasmagambetova and Pavel Dragunov, were rich and evocative, especially the colourful costumes. Video (by Sergio Metalli) and lighting (Irina Vtornikova) played a big role, depicting the conflagrations of war, the luxury of the Khan’s palace, or the symbols of witchcraft. A first-class ballet, choreographed by Galiya Buribaeva and Tursynbek Nurkaliev, provided ethnographic splendour.